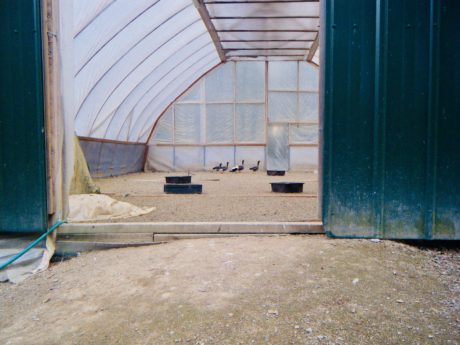 Abstract. The article describes an experiment in captive-bred supplementation of a highly endangered wild bird species that took place in the Norwegian Arctic a few years ago. Following the fate of a single bird, over the course of two years, the argument lays out some of the powerful conceptual, political and affective stakes involved in the experiment. The brief life of the bird, named A16, was contained almost entirely within an unresolved tension between salvific urgency and a purist biopolitics, deeply committed to the preservation of vanishing (or vanished) forms. Behind the scenes of the experiment, ornithological factions clashed over issues like genetic purity, the integrity of migration routes and the potential for behavioral contamination. Laying out the stakes of this, the argument begins to develop an account of salvific violence in conservation work—a framework for questioning the affective investments that drive purificatory biopolitics, especially during a time of planetary turmoil. What stands to be saved, what must be destroyed? What is a species, exactly, such that it can (or cannot) be saved in certain ways? What was A16?

will the pedagogical certification process of this venerable institution accept grade abolitionism as a reasoned position? let's find out.

a nice moment, but the amount of structural power the system invests me with makes me deeply uneasy.

when you give someone a top mark and they burst out crying.

@shannonmattern a number of universities I know also use a financial mangement platform called "Agresso", which I've always found apt for a system that manages us as "human resources".

in the meantime, everything I can put online goes online.